…WITH A SMALL CAR AND NO BULL BARS

3,490km is the distance we had to travel to reach Darwin, our new home. Making it to the Northern Territory on a road trip was epic: it was exciting, tiring, emotional, morbid at times but most of all enlightening.

We had no intention to end up like the Burke and Willis expedition.

SERVICE YOUR CAR: If your car is due for a service before 4,000km, it will be wise to do it now because it will be due right in the middle of your journey. Car servicing can be very expensive but it is not as expensive as if your engine or breaks fail whilst you are stuck in the heat of the Outback.

JERRY CANS OF FUEL: Our car had a small tank compared to some other passenger cars. We took 4 jerry cans of 5L with us which could have been enough to make it 200km in the case of an emergency, conservatively. Whenever we would spot a petrol station, we would fill the tank. Be aware that 98 octane petrol becomes scarce as you go further and further away from Brisbane.

As an alternative, you could pack a few bottles of octane boost to add to the tank before you fill up with 95 octane fuel. We also had 1L of spare oil and 1L of spare coolant.

WATER & FOOD: We planned our itinerary based on the goal that we would drive up to 6 hours a day, including breaks. “Stop. Revive. Survive” is our motto. We saw many roadside memorials along the way and we are grateful to have made it alive, safe and sound.

DRIVING TO DARWIN FROM GOLD COAST

For those who ever wondered: the road is fully sealed, all the way through and in much better conditions in the Northern Territory than in Queensland. As you cross the border, you can feel the difference.

We booked most our night accommodations a week ahead of the trip, using the traditional online booking platforms. As we travelled during school holidays, some of the most popular places were fully booked and left us with few options. If you want a list of the accommodations we stayed at, feel free to hit the comments.

Along the Matilda Way, the Outback Way

From Toowoomba to Barcaldine, the Darling Downs landscape is dry, barren – and miserable. My judgment is probably too harsh because the moody weather did not help. The truth is that almost all the trees have been decimated to make room for the vast grain fields. This section of the Matilda Way is a testament to how intensive agriculture can drastically alter our landscape. 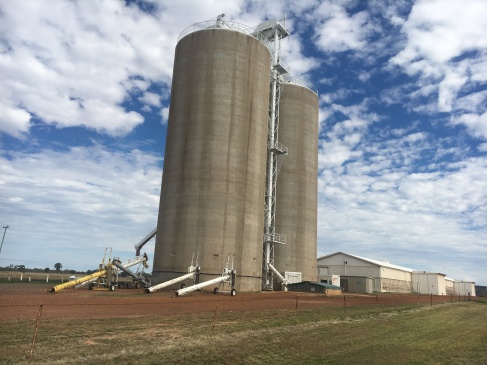 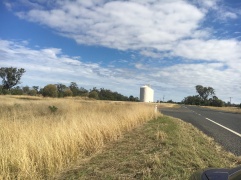 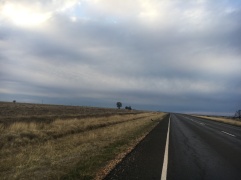 Kilometres upon kilometres of grain fields

We spotted two mobs of emus along the Matilda Way. The last time we had seen a wild emu was three years ago, during our road trip from Melbourne to Adelaide.

In Roma, we had a break at the Big Rig Tourist Centre’s cafe where the food was delicious and fresh. Little did we know, it would be one of the few nice meals we would have during the trip.

The Big Rig Cafe in Roma

In Tambo, we stopped to get some fuel and stretch our legs. I spotted on the side of the road a bottle tree, which is typical of a scrub country.

Between Tambo and Blackall, we saw the Wild Dog Barrier Fence aka the Dingo Fence. I know there were talks to expand the fencing project. However, the one that we spotted seemed to have a gap so cars can get through. No wonder sheep flocks keep being attacked.

On the highway to and from Longreach

We were horrified by the number of dead kangaroos on this section of the road trip. We are used to seeing some roadkill but this was on a greater scale that we had ever seen. Left and right, we were able to count one roadkill every 10 metres. Easy. Furthermore, the kangaroos were all decapitated.

It made us question if drivers were deliberately targeting the kangaroos, opportunistically stopping on the side of the road to get some kangaroo brain stew or collect their skull.

A scene particularly struck me. The night had fallen quicker than we thought and we had to watch out for kangaroos. At one point, we saw a little Joey standing by its dead mom on the side of the road. As we wanted to rescue the little orphan, we got off the car but he escaped into the bush leaving its mum. It’s only when we walked closer to the carcass that we realised that the mum was being eaten by 3 black feral cats. It was brutal. I was weeping for the little Joey. I am sure it was mourning and we interrupted it. With a heavy heart, we drove in silence till our night accommodation.

The day after, we left in mid-morning. It was more of the same carnage. 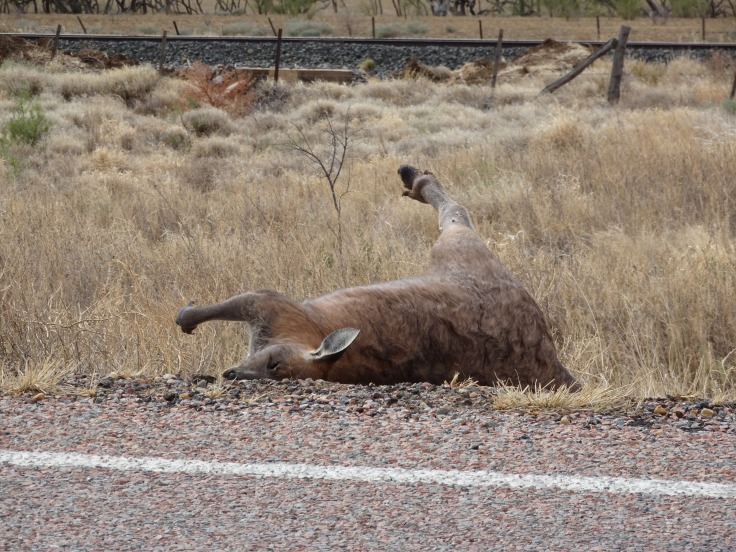 Relive the past in Koa Country

Winton is mostly famous for its dinosaurs fossils and archaeological sites opened to the general public. However, when planning for this road trip, I wanted to stop in Winton for another attraction in mind: the Bladensburg National Park, its wildlife and Skull Hole.

A massacre of Aboriginal people is said to have occurred at Skull Hole in the late 1800s. It retaliation for the murder of a teamster, Sergeant Moran, then in charge of the Winton Police Station proceeded to track the murderers. When attacked, he dealt punitive measures to his assailants. This climaxed at Skull Hole, where the tribe was massacred by black troopers. If there was a printed record made at the time, none remains today. That’s probably why the site is difficult to find in the first place and there is little to no information about it once we managed to get there.

It is a shame that no official signage recounted the history of this place. However, I would recommend dropping by the Homestead where there is a display of artefacts from that period.

Then the route of the River Gum

Kangaroos, Wallabies and the Magic of the Red Dirt

You don’t need a 4WD to access Bladensburg National Park, just good tyres. The Route of the River Gum is partially unsealed. It is imperative to drive slowly as the park is home to red kangaroos, wallabies and stray cows.

As we drove back to our motel, we saw 3 brolgas wandering in the streets of the town. It was a first for us. I didn’t even know this type of big bird existed. They look like a perfect mix of stork and flamingo.

Winton: There is something in the water

When turning the tap on, there is a strong, sulfuric smell emanating from the tap. But don’t be alarmed, the water is actually very nice to drink and lives your skin silky smooth after a shower. A pure delight!

The water in Winton comes directly from the Great Artesian Basin, approximately 1.2km underground. The gas gives the water a very distinctive aroma. The Winton water is so good you could bottle it and sell it! The water is definitely Winton’s best-kept secret.

The scenery along the road to Cloncurry was surprisingly luscious. The colours of the landscape were vividly red, blue and green. It was reassuring to see that the cows had plenty of trees to choose from to get some shade.

There is a mini Woolworths in Cloncurry. I noticed a very friendly vibe from the people. I guess that’s probably why they claim to be the friendliest town of the Great North West. We stopped there to get more food supplies and chat with the locals. It then hit me that the Indigenous culture was more predominant – and I liked it!

Past Conclurry, we made a detour via Chinaman Creek Dam. It is a nice spot for locals to do some water activities and picnic. Don’t be tempted to swim into the scintillating blue water though: it is infested with lice!

We met a couple of Grey Nomads travelling in a caravan. They were heading to the Golf of Carpentaria. I wish we had an extra week to allow ourselves to divert from our main itinerary. After all, Burktown was only 479km – North.

At this stage of our road trip, we already had driven over 1,700km. We were halfway there but I remember looking at the distance we still had to drive until Darwin and thinking “Wow, this country is huge… I think we are crazy to do this”.

Are we? (to be continued here)

4 thoughts on “Road Trip Guide: Driving to Darwin From the Gold Coast in 7 Days (Part 1)”

What do you think? Cancel reply

This site uses Akismet to reduce spam. Learn how your comment data is processed.