3,490km is the distance we had to travel to reach Darwin, our new home. Making it to the Northern Territory on a road trip was epic: it was exciting, tiring, emotional, morbid at times but most of all enlightening.

In my previous post, I talked about the logistics and preparation that went into this trip. We left off in Cloncurry, halfway into the journey.

On the way from Cloncurry to Mount Isa (125km), we stopped at the Kalkadoon and Mitakoodi People Monument. Once again, there were little to no information about its historical significance. One of the sides of the double brick wall, there was a plaque reading:

YOU WHO PASS BY

ARE NOW ENTERING THE ANCIENT

TRIBAL LANDS OF THE KALKADOON

DISPOSSESSED BY THE EUROPEAN

BE BROTHER AND SISTER TO THEIR DESCENDANTS 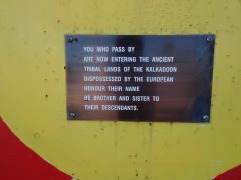 Honouring their name, we did…

We arrived in Mount Isa right on time to see the sunset from the city’s Hilary Street lookout. The view was spectacular! We could see the chimney of the mine dominating the city. 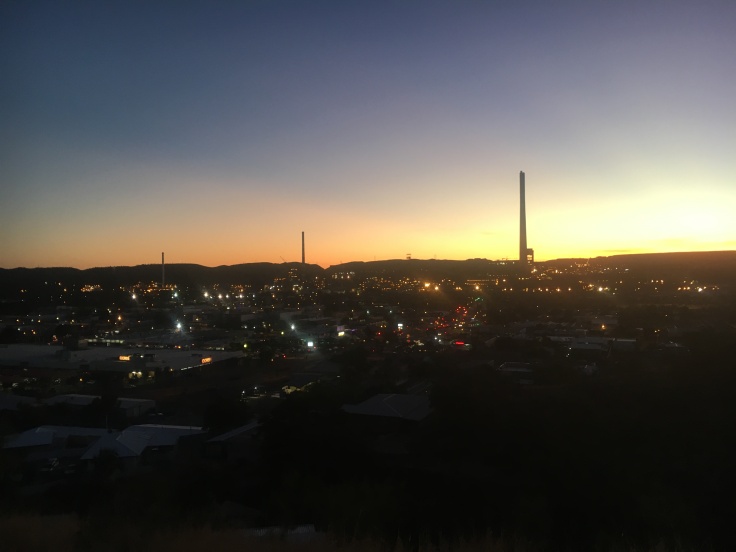 I’ve always thought Mount Isa to be a small, dry, country mining town in the middle of nowhere. Was I wrong… Mount Isa is quite spread out, with a shopping centre and different suburbs – the mine site being the biggest of them all.

Knowing we were 200km away from the Northern Territory border and 465km for our next stop in Tablelands, NT; we filled the tank and bought more food, water and downloaded additional podcasts to keep us entertained.

Apparently, it’s pretty common to see decorated termite mounds along the Stuart Highway, from Alice Springs to Darwin, but it seems like this local tradition has spread to the East since we spotted similar status in Queensland. 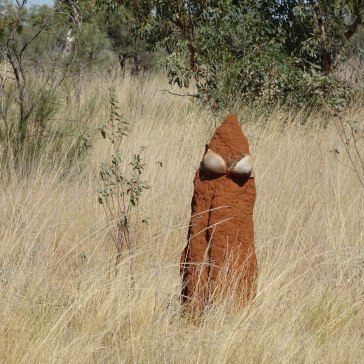 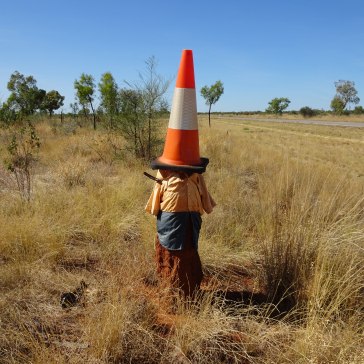 The termite mounds vary in shape and sizes but so did their decoration. Perhaps it is the Outback equivalent of the snowman.

We had a quick break in Camooweal, the last town before we crossed the border. I remember feeling excited as we approached the Northern Territory border as it would be the fourth interstate border that I cross by road in Australia.

That’s quite a personal achievement!

WE DID IT! WE ARE TERRITORIANS

Mind you, a couple of hundreds of metres beforehand we were greeted by a more formal signage reminding travellers and visitors that liquor and other “prohibited materials” are restricted in specified areas of the NT.

There are many Indigenous communities where alcohol is totally banned. They are known as dry areas. Breaking the law will lead to a fine or imprisonment. These dry areas were imposed without any consultations in 2007 during the Northern Territory National Emergency Response (aka the Northern Territory intervention) by the Federal Government.

For better or worse, the alcohol ban across the Northern Territory causes Indigenous communities to ask about their right to self-determination. The controversial topic is regularly the subject of debate at the Parliament and the UN Human Rights Commission has some pretty strong views about the Intervention.

The current Intervention legislation is not due to expire until 2022 and has been rebranded as the Stronger Futures in the Northern Territory Act in 2012.

You can read more about it here or here.

The Barkly Homestead is like a luscious oasis in the Outback. Unless you travel with BYO accommodation (i.e. tent, caravan or campervan), it is the only place that offers a bed after Camooweal and before Tennant Creek.

It was the most expensive night accommodation of the trip but understandably so. They have their own diesel generators to power the whole site. These generators use 500 litres of diesel per day. Our motel room was far from being rustic as it was fully renovated.

We stayed during the State of Origin game and the management had provided entertainment for the night. I can’t say that I tried the whole menu but the barramundi was delicious! 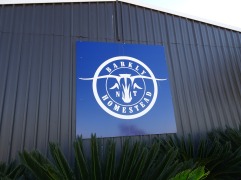 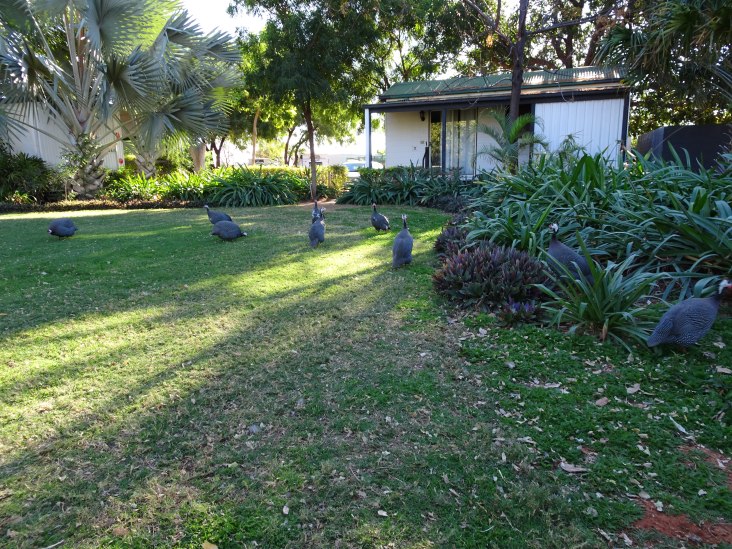 It’s only when we reached the Three Ways Roadhouse, at the junction of the Stuart and Barkly Highways that we saw our first road sign pointing towards Darwin in 3 days.

The Shell station was a good opportunity to take pictures of the road trains. One of them was carrying cars, without any protection against gravel strikes. It was a relief that we did not use a car carrier to transport our car. 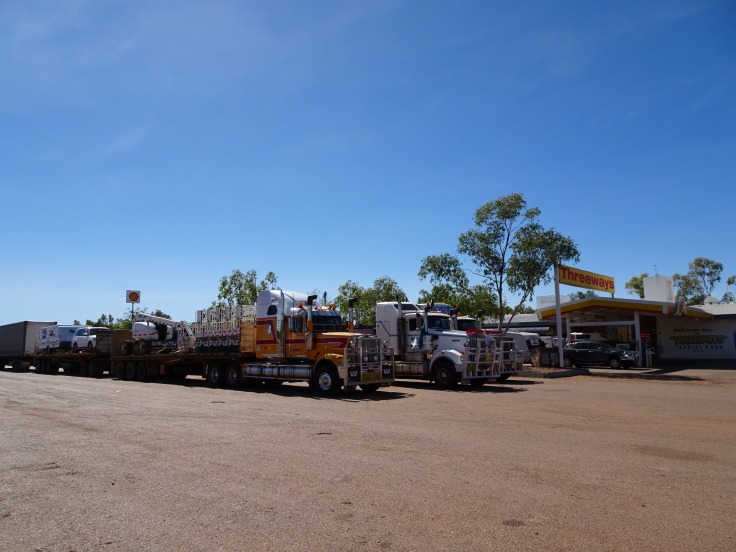 The Daly Waters Pub is one of those iconic pubs that is renowned for its eclectic decoration.

On the outside, it is quite charming. But when we step inside, it’s another story. Every square centimetre is covered by all sorts of paraphernalia: bras, flags, student IDs, banknotes and coins from all over the world, plates, business cards, stickers, pennants, instruments, anything… you name it!

Maybe I was too tired to enjoy the atmosphere but I personally was not a fan of the decor. I would most certainly recommend the pancakes for breakfast.

REJUVENATING IN THE HOT SPRINGS OF MATARANKA

Or so we tried…

The hot springs and thermal pools are located in the Elsey National Park, 1 hour South of Katherine, NT. Bitter Springs was named by a worker on the Overland Telegraph Line in 1871, after the bitter taste of the water. The area was later renamed Mataranka.

For the Yangman and Mangarrayi people, Mataranka is part of a greater area called Korran. It was created by red-tail black cockatoo spirits. 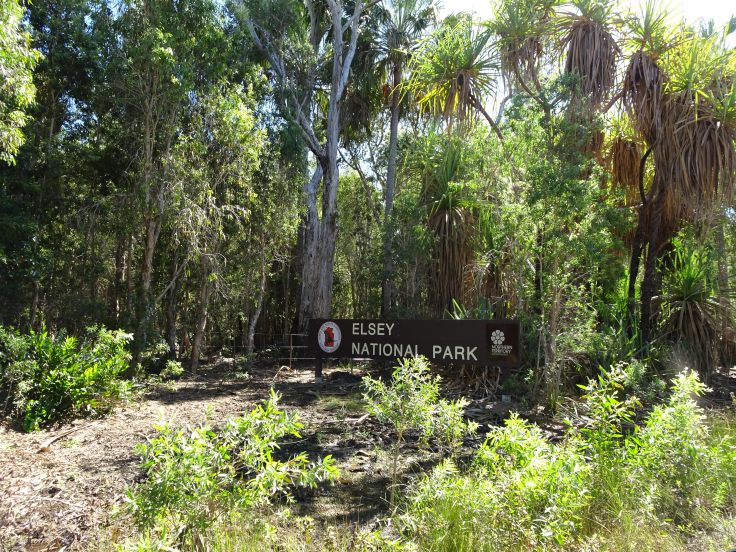 Swimming is only allowed during the dry season. We were welcomed by a sign warning us of the potential presence of freshwater crocodiles. “They can become aggressive and cause injury if disturbed”. That’s a bit of an understatement, isn’t it? 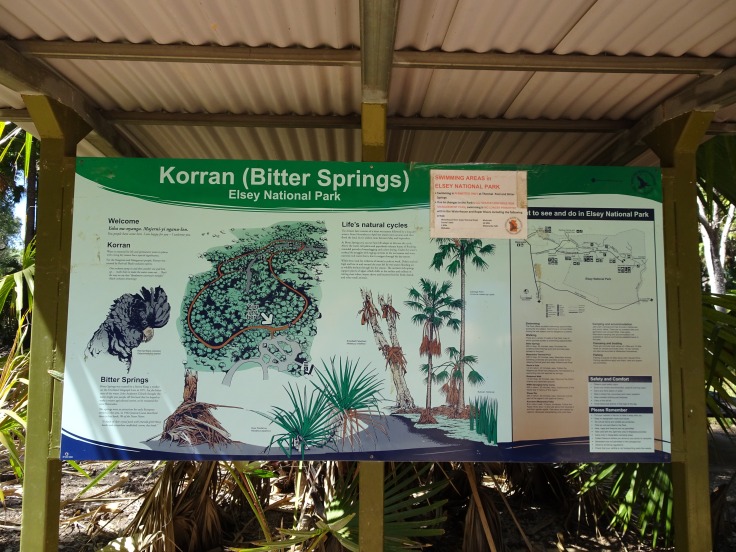 The water might be bitter but its colour is so naturally blue and clear that you could wonder if it was a man-made swimming pool in disguise. 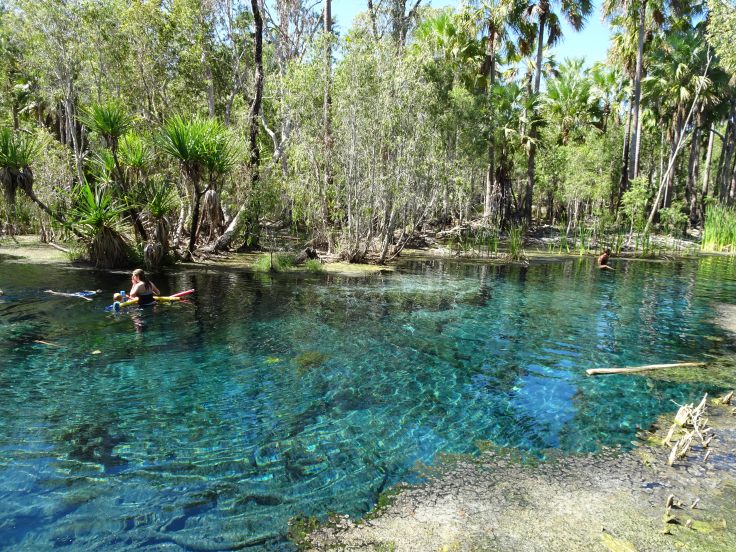 Unfortunately, we were not prepared to enjoy the experience to its fullest. It is preferable to have foam noodles as the water is deeper than head height and the current is strong. Nonetheless, I dipped my feet into the water… and it was HOT! Not warm. But hot! I felt like some pasta about to be cooked al dente!

I guess we will have to come back another day, before the wet season, as it is a must-do of the region.

It was time for us to head North towards Katherine, where we initially planned to spend the night. We were so impatient to reach our final destination that we drove straight to Darwin and called it a day.

After all, now that we are proud Territorian, we have all the time in the world to explore this part of Australia that we call home.

14 thoughts on “Making it to the Northern Territory (PT 2): Termite Mounds, Bras and Hot Springs”

What do you think? Cancel reply

This site uses Akismet to reduce spam. Learn how your comment data is processed.